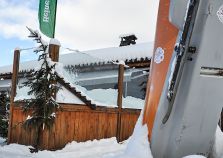 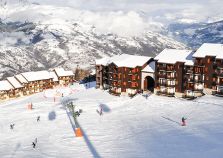 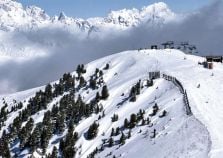 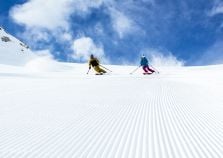 La Plagne Montalbert is a traditional, authentic French village with a rustic alpine charm, has lots of great restaurants, such as Union, and is part of one of the world's largest skiing areas known as Paradiski which is the combination of the resorts that make up La Plagne and Les Arcs. It takes you away from the hustle and bustle and provides you with cosy chalets, amazing views and a friendly, laid back vibe. If you’re new to La Plagne Montalbert it is the ideal destination to stay, with an efficient lift system to other areas of La Plagne, good bars, lots of activities and even snow shoe walks.

La Plagne Montalbert is one of 10 villages that make up the La Plagne ski area. Tree-lined runs hold the snow until very late in the season and the slopes are covered by a network of snow cannons, so runs all the way home are practically guaranteed. There is a fast Telecabine that takes you out of the village and a vast network of interconnecting chairlifts takes you to all the other villages in the La Plagne area and beyond to the Les Arcs area collectively known as Paradiski.
Christmas and New Year in Montalbert is a wonderful time with torch light skiing, firework displays and parties. On Christmas Eve they have a great street festival with Father Christmas being drawn on a sleigh surrounded by all the ski instructors with flaming torches and the old church in the centre of the village usually has a real nativity scene featuring a real baby, donkey and other animals!


Les Chalets de Montalbert – These are three chalets side by side, each divided into 12 ski apartments, they’re located directly on the nursery piste and in a quiet position just by the forest. The chalets are ski in/out and outside is the free button lift which is open to late afternoon. The chalets are only about 5 minutes from the village centre and all have stunning views.


Les Granges – These apartments are located in a quiet position in the village centre and are only 150m away from the slopes and the village itself.


The Foreign and Commonwealth Office (FCO) issues travel advice on destinations, which include information on passports, visas, health, safety and security can be viewed here.

Things to do in La Plagne Montalbert

Explore the more remote (and often most beautiful) forested areas around Plagne Montalbert, there is over 40km of marked paths. Snow shoe hire and guided tours are both available.

For the more adventurous (and those with transport) you can try out the Olympic bobsleigh runs at Plagne 1800. The Bob Raft is a self-steering 4 man bobsleigh. For the real thrills and spills of the sport, try out the Taxi Bob which is a "proper" 4 man bobsleigh driven at 100km/h by a professional driver; or go it alone in your very own Mono Bob.

Courchevel has its own airport  and you can book flights over the mountain with the following company www.aeroclub-courchevel.com  or try a helicopter flight from www.azurhelico.com  or how about a hot air balloon flight from www.skivol.com

In addition for all catered ski chalets or self-catered ski apartments you can relax with a massage form a mobile massage service to book this simply contact Anna at Massage me by clicking on the logo below.

There are 9 very good restaurants in La Plagne Montalbert. Our favourites include:
Le Forperet that is an onpiste restaurant that is also open in the evening, they come to pick you up free of charge and of course drop you home its a great experience.
Le Fiftys Legend - this servces great pizzas (they are very large)
La Luge - A great pizza place
Le Trappeurs Cafe - Another good central restaurant
La Tourmente - Great steaks.

How snow sure is La Plagne?

What’s on in La Plagne Montalbert

Want to find out more about La Plagne Montalbert?