We’ve been going to the Alps and capturing footage of ski holidays for years, we like to get shots of the resorts, the mountains, nature and of course those lovely Mountain Heaven catered chalets. Travelling, doing cool stuff, filming it and handling lots of media can present a few technical difficulties and a few tough choices if you want to travel light. Now we want to say at this point, this is a gadget article so if technical stuff turns you off, why not check out all the other cool stuff on our blog before we bore you to death?

Do we take the laptop or stick to mobile devices? Will we be able to read GoPro SD cards and move data to a hard drive with just the tablet and/or phone? What if we want to stream some movies from a memory stick on the plane? Do you need to buy a battery pack? We capture a lot of video and we want to back it up. We want entertainment on the screen but we don’t want to fill our iPad storage up with a few HD videos. We don’t want to have to take laptops or have to buy some travel specific wireless hard drive, we have enough USB external hard drives already, but how to plug them in if you have a mobile and a GoPro?

So what is the solution?

If you want to travel light and yet you have some technical requirements to fulfil, the HooToo TripMate Titan might be the awesome solution you never realised you need. We started using one a few years ago and quickly found it allowed us to travel light and handle all our little techie admin tasks. And no, we’re not being paid to write about the HooToo, this is 100% un-sponsored content, we just like the little thing is all!

To properly explain this gadget, its features and what we’ve been using it for on our ski and snowboard trips, we’re going to take you through each of the main features one at a time. Before we begin let’s deal with the name, the company is HooToo their series of battery powered travel routers is called TripMate and this particular one is the Titan. You can check out the range of HooToo TripMate products on their network devices page

About the HooToo TripMate Titan 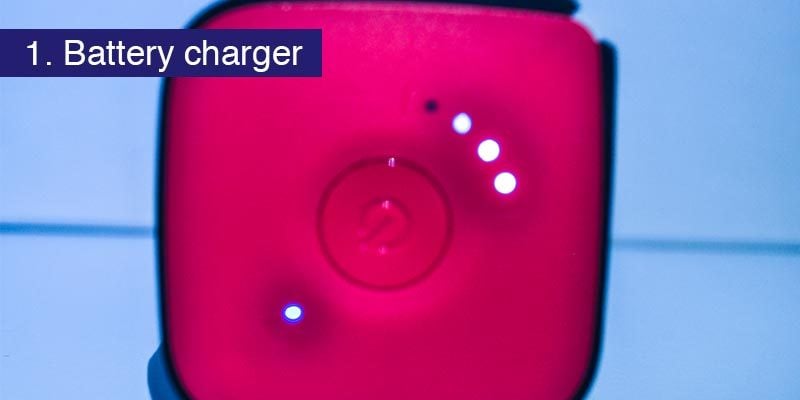 We’ll start with the simplest feature of all. It has a 10400mAh battery capable of fully charging most smartphones. It is described as a wireless travel router, so charging your gadgets is not even one its main functions. The battery runs all its other features so of course if you use it up charging your phone, it’ll need some charge before it can go back to being a router. So if you need a bit of occasional juice, this little box provides that as one of it’s B-list features. We also have a smaller solar battery pack we use, we find we can run both it and the TripMate out of charge and then plug the solar charger (strapped to the outside of a rucksack), into the TripMate (stashed inside the bag) and head out into the snow on a sunny day and both will be fully charged by the end of it. So it’s a handy power bank! Off to a good start for the HooToo TripMate Titan

Another little trick up its sleeve. The Titan has a standard ethernet port and will join any open network you plug into it. It will then create its own wireless network that you join and control and then give your connected devices access to that ethernet connection. We’ve used this in hotels that give you a plug in point for free but make you pay for WiFI. It can also temporarily solve wifi coverage problems in a building, you can run a cable from the router to your HooToo and bring the wifi signal closer to you. This isn’t something we need very often but it can be the perfect solution sometimes when you need internet and there’s problems with the wifi.

It can be the middle man wifi device

The Titan can join a wifi network and then produce its own wifi network that links through it to the internet. The non technical might go a bit crosseyed here but to explain it another way. When you join a wifi network on your phone your connection goes from the phone to the wifi router and then out to the internet. The HooToo Titan can sit in the middle. Your phone joins the Titan’s wifi network and the Titan then joins another wifi so your connection goes from the phone to the Titan then to the wifi router and out to the internet. Why would you do this? There are several reasons. When you are not sure if you can trust a wifi network it is safer to connect to it via your TripMate device rather than directly. This can be handy when travelling and using wifi hotspots around the place. It can extend the range of wifi by sitting halfway between where you want it and the main wifi router. And again, if a hotel makes you pay for one internet connection password, you can use that in the HooToo and share that one connection with all your devices (but you didn’t hear it from us). 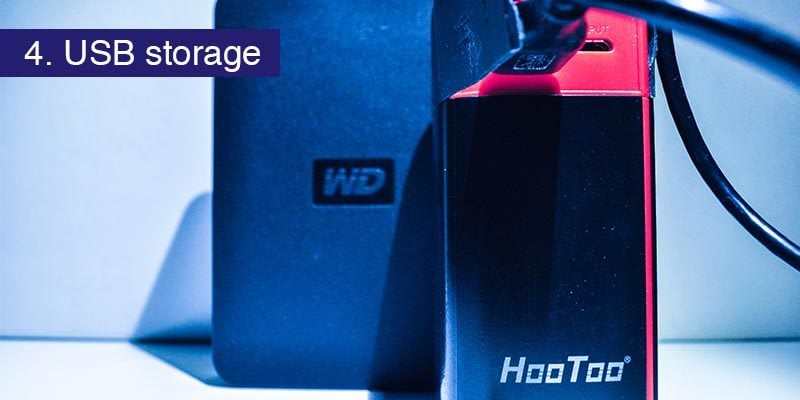 Then you can plug in storage

You can plug USB sticks and 2.5inch USB hard drives into it and move files to them from your mobile devices. The TripMate Titan will drive a 2.5inch HDD without external power, it works with a 3.5inch drive if that gets power somewhere else. The TripMate app is a pretty decent file manager and allows you to move files to your drives from your connected mobile devices and vice versa. This means the TripMate Titan merges network traffic with disk storage and all from a battery powered unit. Now we’re talking. We’ve used this to offload our phone videos to hard drives to free up storage. Our mobiles don’t have enough space to store dozens of large videos so being able to archive them each day allows us no fear of hitting the storage limit mid shot. 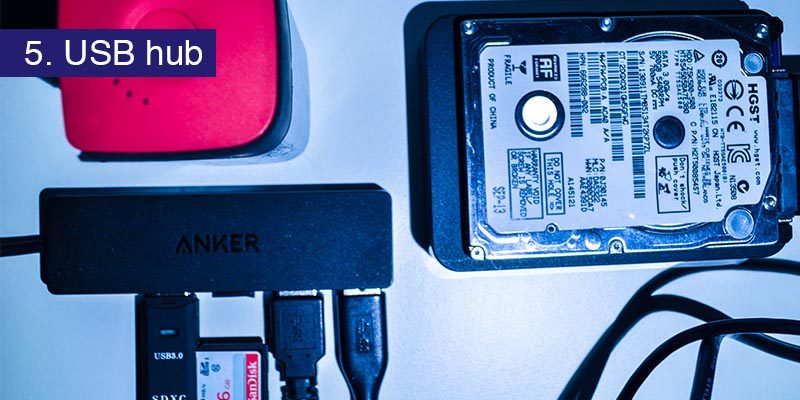 You can use a USB hub and mount multiple disks

When we have lots of important shots on SD cards, we want to back them up in case of loss or failure so we need to read SD cards and write to disks. The Titan has one USB port which might seem like an issue when you have both an SD card and a hard drive to plug in. We simply plug in a decent quality (Anker) 4 port USB 3.0 extension hub and can hook up multiple devices. Usually we’re putting an SD card reader and 2 x USB external drives into it. Our routine is to copy the SD card contents to both drives and then wipe the card and move to the next one. This means we have 2 copies of our data and can rest easy about the risk of disk failure. It also means you can copy files from one hard drive to another and/or between your mobile devices freely. This is a super handy feature. 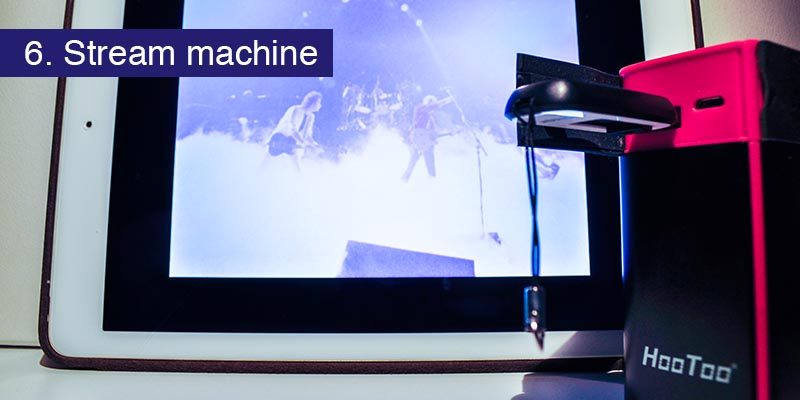 Stream your TV and movies

Last and by no means least is how Titan streams media to mobile devices. Let’s start with a real world example, we have loads of TV series and movies as video files at home but our iPads and iPhones don’t have the storage to carry many of them and there’s no streaming on the plane…or is there? If you fill up a 128GB memory stick with a big selection of your entertainment media, you can pop that in the HooToo and stream media from the memory stick to multiple mobile devices nearby. So on the flight my partner and I browse a media library and from the HooToo TripMate app, select what we want to watch and stream it to the iPad and wireless headphones. You need no internet connection and you don’t need to pre-choose which media to take, you’re only limited by the size of memory stick you buy (but don’t get the super cheap ones!). The 300Mbps wifi it provides is enough to stream a couple of regular 1080p video files, we don’t recommend trying 4k though. 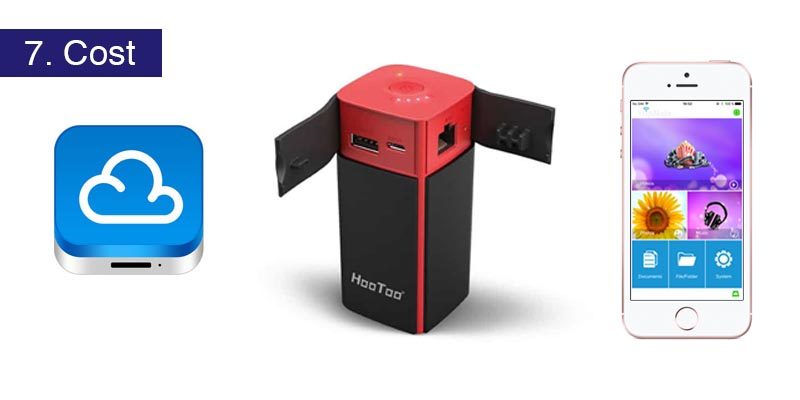 So what do they cost?

At the time of writing the HooToo TripMate Titan is available for £42.99 on Amazon. When we realised it would enable us to leave the laptops behind and still manage our media the way we wanted, we didn’t hesitate. We’re a big fan of the device and suspect the HooToo TripMate might be the best choice of those on the market however other devices that offer similar services exist all we haven’t tried them all out. The main thing is that a battery powered wireless router with a USB port, a network port and a decent app is a very useful tool when travelling and handling media. If you liked our tips on the HooToo, check out our simple guide to ski resort time lapse videos and other ski tech articles