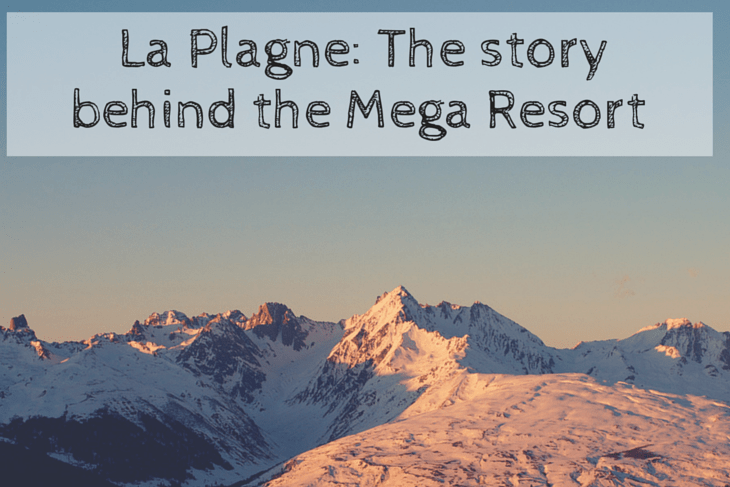 One of the undisputed mega resorts of the Northern Tarentaise, La Plagne is a vast playground of snow and one which is enjoyed by millions all over the world every season. While today it provides over 100km2 of skiable terrain, the region would have looked very different just 60 years ago. To help you find out more, here’s a little story about the history of this famous ski resort.

While the opportunity for fantastic skiing has remained in La Plagne for centuries, the first ski holidays to La Plagne weren’t offered until the early 1960s. The idea to alter the landscape into a ski resort was originally a method to avoid the mountain begin deserted and being too reliant on farming and mining, an issue which had led to young residents fleeing to nearby cities such as Chambery.

A particularly prosperous area for mining was La Plagne 1800, and visitors can learn all about the mining heritage through the specialist mining museum, which is open to visitors throughout the ski season. Be sure to check opening times though. While visiting the museum be sure to visit Bar La Mine, a themed pub which is home to a host of mining memorabilia that would have been used in the region.

The true catalyst for the creation of the resort was Dr Borrione. He was the mayor of Aime and one of just four members of society trusted with each of the four main regions: Macot, Aime, de Longefoy and Bellentre. As this quartet has previously been separated through a deep sense of rivalry, having a figurehead to unite them was always going to be a considerable help.

Dr Borrione had his sights set on building the first lifts and accommodation on the ‘Plateau de La Plagne’. However, his efforts were initially quelled after having heavy resistance from local landowners. To counteract this, he took those against the idea to the neighbouring Courchevel ski resort to show the huge benefits that a winter resort can offer, and while some resistance remained, a meeting between Borrione and the director of the mines unveiled that the mines would be closed in ten years – putting any resistance to the construction plans to an end.

Once Borrione was given the green light, he enlisted the help of legendary skier Emile Allais – pictured below – to help outlay the best ski area. During a helicopter trip in 1960 they found two potential slopes, which are today known as Biolley and Grand Rochette. The first two drag lifts in La Plagne were open just one year later and served four pistes. It didn’t take long for La Plagne to grow, with the neighbouring villages all keen to offer the complete snow experience for visitors. Lifts continued to be erected across the mountainside.

The original resort of Plateau de La Plagne is now called Plagne Centre and it was designed by Michel Besancon to make it accessible to skiers of all abilities. With the majority of hotels in the resort ski to door, it’s certainly one of the most family friendly and accessible of all the resorts in the Alps.

It was this design which is directly associated with the growth of resorts in the La Plagne skiing complex. While the general area was expanded to include the resorts of Champagny, Les Coches and Montalbert, the demand from skiers and snowboarders across Europe led to the development of several purpose-built resorts. These include Aime 2000, Plagne Bellecote and Plagne 1800, which were opened in 1971, 1974 and 1981 respectively.

La Plagne was firmly in the limelight in 1992 after the town of Albertville hosted the 1992 Olympic Games, an event which saw the first and only bobsleigh in France constructed in La Plagne. Still fully operational today, it’s a fantastic attraction to discover during your La Plagne holidays.

The resort we know today

La Plagne today remains a key part of the Paradiski network, which was formed in 2003 when the region united with the neighbouring resort of Les Arcs. The two areas are linked through the Vanoise Express, a colossal mode of transport which was the biggest, longest and fastest cable car on the planet until the unveiling of the 3S in Austria. Collectively there are 225km of skiable terrain, which is laid out across 132 pisted runs – meaning there’s plenty of room for all.

The most recent development in the region is currently taking place down in La Plagne Montalbert, where a brand new gondola is set to be completed before the start of the new season. Check out our recent article here to find out more.

Hi Dennis,
Thanks a lot for letting us know! I’ll have a look into that and put the opening times in the article so as not to disappoint visitors!