Avalanches need no scientific explanation for us to understand their power, you only need to witness them to feel it. Every year there are avalanches in the high places of the world and these days, we can view them more than ever online. They’re incredible enough viewed through your phone screen but in real life they can make us feel very small in world of big forces. It’s no surprise that in ancient days people would believe that some sort of deity resided at the top of tall mountains and would express themselves with acts of mighty rage.

Today we know enough about avalanches to be sure that there’s no requirement for the wrath of God, you simply need a mountain and regular snow. Luckily for us, the scientists don’t stop there, they want to understand avalanches enough to predict their behaviour, understand when they are likely to be triggered and ultimately allow us some power over this phenomenon, even if it’s only the power to run away at the right moment.

The real science of avalanches is complex, involves plenty of maths and concepts like fluid dynamics and saltation layers. We would need to go back to school to properly explain the problems scientists are currently grappling with and so would most of our audience to read such an article! So in this article we thought we’d look at some of the basic ideas behind Avalanches, so we can all understand them a little better, why they’re so sudden and why it’s tricky to predict them. The more we find out about the complexities of Avalanches the more we respect them and to be honest, fear their sudden wrath.

Lesson 1 – It’s all about layers 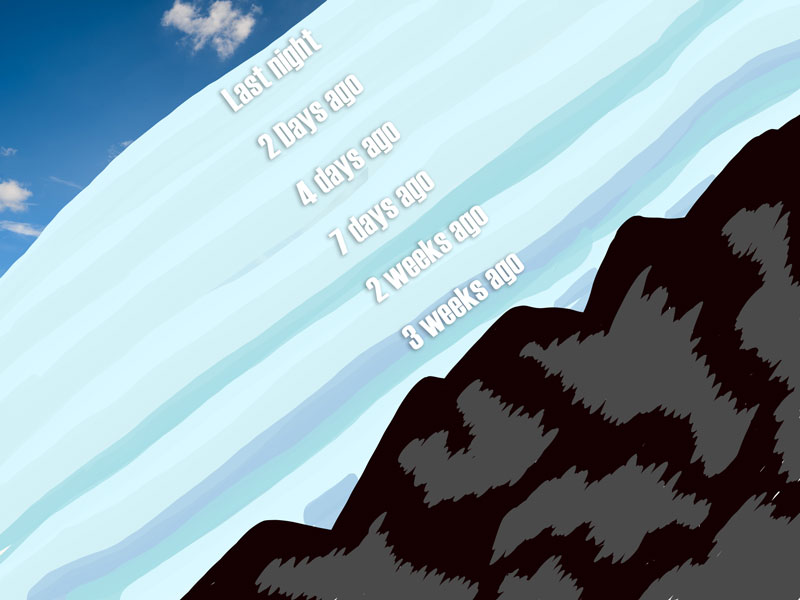 The snowpack is made of layers laid down through time. The structure of these layers is crucial to avalanche risk

As snow falls, the conditions at the time determine exactly what sort of snow it will be. A snowpack on a mountainside is made up of lots of different layers each from a snowfall in the past. The different types of snow are compacted together and develop into this complex material we call the snowpack. Depending on what sort of snow fell in what order and what amount, you can have snowpacks that look the same on the surface but are very different underneath. For example large traditional looking snowflakes lock nicely together and make steady snow layers, however where snow meets super cool water on the way down you get a snow type called rime. When rime builds into pellets if causes a snow layer called graupel which is infamous for instability and a good basis for a future avalanche. Scientists study these layers and their properties in laboratories so that when measurements are made on a mountainside in the real world, we can have some idea of what this snow might do today. They look at the size and type of the grains of snow/ice making up the layer, they test how dense it is and how ‘wet’ and do hundreds of experiments to be able to predict how it might behave on a mountainside.

There are 2 main types of snow avalanches, these are shown in the diagrams below. The light blue layer represents a weak layer of snow (perhaps our graupel snow) that is the one to break in each example.

Sluffs are where the top layer of snow becomes loose and tumbles over the mountainside as a light sheet. They don’t have the mass to gather into a thundering juggernaut and so are not nearly as dangerous as the other type of avalanche, Slab. 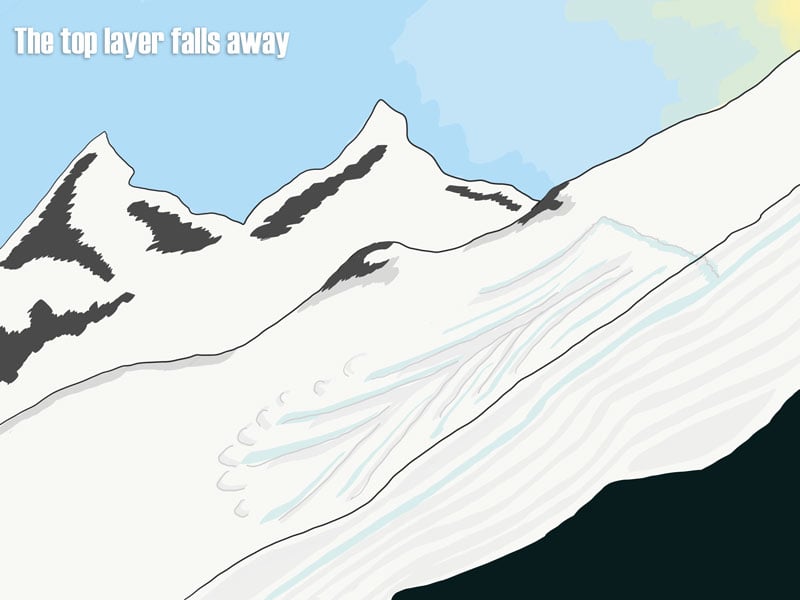 A sluff avalanche where a top layer of snow tumbles down the mountainside. These can be alarming but much less dangerous than the other type, slab avalanches.

Slab avalanches are where a layer of snow deep in the snowpack becomes weakened. This means layers of heavy snow are resting on a weak sheet that could start to slip all at the same time. When a slab avalanche is brewing it gets easier and easier to set it off until even the vibrations of a skier are enough to start that terrifying chain reaction where that hidden layer lets go and a huge slab of snow begins to move. 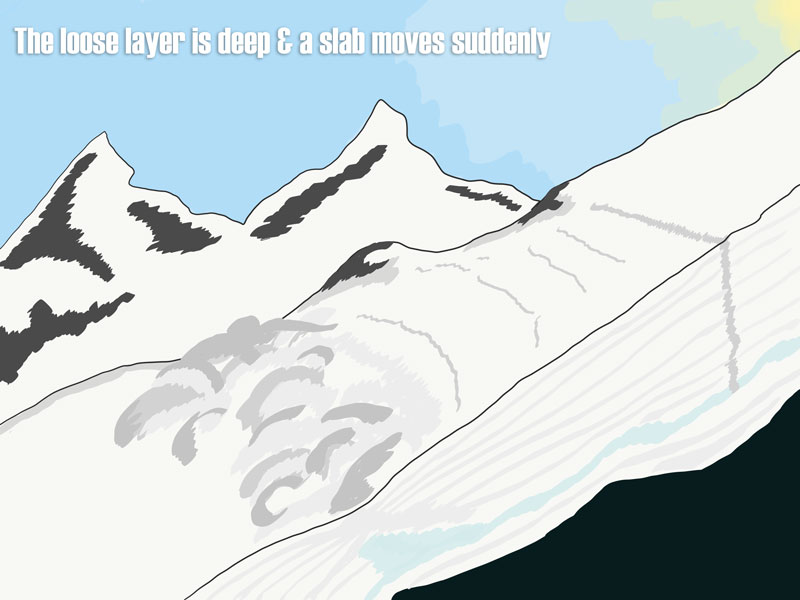 The weak layer is deep, when the snow above is heavy enough to start moving, a huge mass of snow begins to tumble and build into a churning mass of devastation.

Lesson 3 – The path of a slab avalanche

Mountains leave clues about their avalanche habits. As a skier or snowboarder caught with an oncoming avalanche, knowing what course the avalanche will take and how it will behave on the way down could give you the clue you need to flee in the right direction and increase your chances of making it. 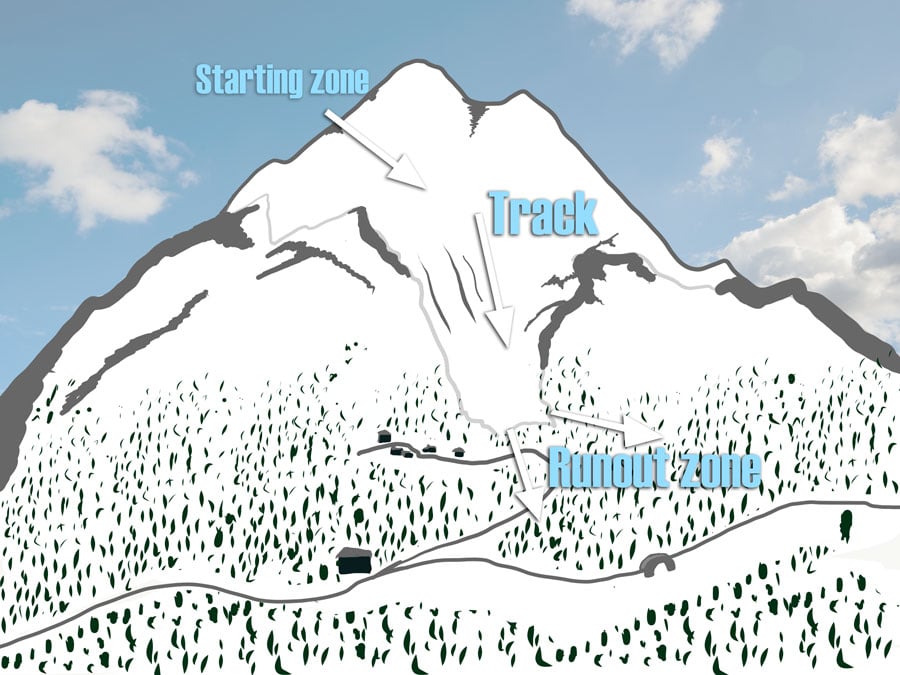 Large avalanches tend to find their route down the mountain and leave their mark behind them. Often a range of slopes can give birth to avalanches that will end up following the same main track down. The realities are complex but in general you want to escape diagonally away to the side of the centre of the track. Think of the avalanches as the train and the track as well… the track. Don’t be caught on the track!

The place an avalanche begins is helpfully known as the ‘starting zone’. This area has to be typically 25 to 60 degrees incline, steep enough to allow snow to move quickly but not so steep that little snow can build up on the mountain side. They often look like a wide and inviting powder field, not very threatening to the untrained eye. However when the conditions are right literally nothing is required for an avalanche to begin, they start all on their own as the weight of snow builds up. So if a starting zone is very nearly ready to ‘go off’ a single skier or even a noise can be enough to trigger it. When it takes almost nothing to trigger it, it was going to happen soon anyway.

A slab avalanche builds speed until the friction from the ground, the air and the avalanche’s own internal friction balance out the force of gravity. This means that on a steep enough slope that funnels the mass into a narrow space, an avalanche can reach astonishing speeds of upto 320kph before it stabilises and can begin to slow down. Where avalanches follow a track regularly, that area gets pounded by the action. You can usually see the scars in the rock and an abundance of smaller stones amongst the rocks. An avalanche isn’t just snow, it’ll bring anything it can along for the ride and that includes rocks, boulders, trees and even cars and buildings it found in its path.

The runout zone is where the avalanche starts to run out of steam. Usually the terrain opens up and gets less steep allowing for the momentum of the snow to be sent in many directions which drains the juggernaught of its power. Interestingly in some avalanches much of the snow in the runout becomes a complex cloud of tiny crystals which billows out in all directions to spend a long time floating as clouds before they settle and the final consequences of the avalanche become visible.

Now we know a bit more, let’s just watch some in action

Here are some videos of avalanches in action, feel the awe and see if you can understand what you’re seeing a little better now.

As a skier, you don’t need to be interested in the science of avalanches to avoid them or minimise the risk but you do need to pay attention to avalanche safety rules & advice shaped by science and use life saving equipment made possible by science. Without avalanche science we’d be seeing more disasters every year and it’d be a fair bit more dangerous out there on your ski holiday.

Luckily there are scientists and engineers around the world working on avalanche related problems and they’re getting better at predicting them, managing them and warning people about them. These smart ladies and gents have been doing everything from computer modelling to real life observation of avalanches to be able to better understand all the factors at work.

Let’s not forget our front line of defence

When we go out to a ski resort we are all protected by a team of people who manage the mountainside to keep us safe.

They install barriers and other physical defences. These break up the layers of snow and make it far harder for a slab avalanche to form and disperse the energy of moving snow in all directions to avoid it becoming a churning mass.

Increasingly resorts are installing equipment to monitor live snow conditions and provide warnings to those on the mountain side. In the future we can expect these systems to become more elaborate, perhaps they’ll all plug into a phone app and help prevent individuals on the mountain from heading into danger.

Most skiers and boarders will have heard the distant thump of explosives echoing out across the mountains. This is the work of avalanche safety experts, they monitor the conditions in all their target avalanche zones and when trouble is brewing, they head out there to set it off safely before it goes off at random later. This is as cool as it sounds, they traverse the mountain peaks, approach the snowpack from above, plant specialist explosives in ideal spots and then retreat to set them off and watch the results. It’s very dangerous work and disasters do occur, these people risk themselves to reduce the risk for the rest of us plus they get to blow stuff up. So if you ever meet an avalanche safety crew in a resort bar, consider buying them a drink, they deserve it and probably have some stories to tell.